North African cuisine is heavily influenced by a number of cultures including Arabic culture, with ingredients such as ginger, saffron and cumin and the matching of sweet and sour, which gives North African dishes a distinct flavour. The Spanish introduced products like olives, tomatoes, paprika and Jewish refugees introduced preserving methods such as preserved lemons. Couscous, a staple of North Africa is produced from wheat flour rolled into tiny balls of dough which are steamed and eaten as an accompaniment to tagines.

This dish uses all these ingredients to create a flavour explosive recipe for one to add to their weeknight dinner collection. If you do make this tagine and couscous recipe, please share your photos and tag us on Alfalfa House Instagram. We would love to see your creations 🙂 Recipe and images courtesy of Sandra Clark, one of our members and volunteers 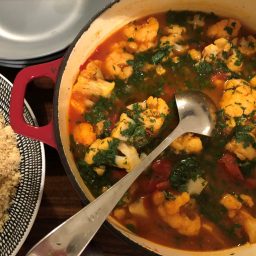 To make the couscous

Tips:
If you have a heat proof saucepan you can put the tagine in the oven at 160 degrees C. for 20 minutes.
Keyword cauliflower, couscous, tagine, vegetarian